To create a passed pawn is important in chess as this single factor might win the game.

A passed pawn has “passed” the opponents pawns. This means it cannot be stopped or captured by an opponents pawn anymore as there is no opposing pawn to block it and there is no adjacent pawn that might exchange it.

The passed pawn will eventually advance to the eight rank and will be promoted into a queen unless it is captured by the opponents pieces. 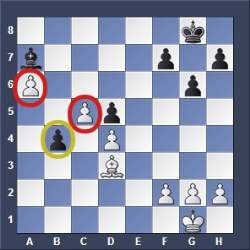 In the above position you see various passed pawns.

The white a-pawn is a passed pawn. It can only be blocked by the black pieces or the black king.
A pawn like this can become weak if it is not supported by your own pieces. So make sure that the opponents pieces are placed ineffectively and are unable to capture a far advanced pawn. 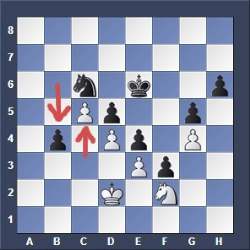