I assume you are a beginner and want to learn chess properly right from the start. Learn this basic chess endgame first, which teaches you how to give checkmate having a rook only. This means you have a rook and a king and win versus the king of the opponent.

This is basic chess knowledge that you must know if you want to become a chess player. There is a technique which enables you to give a checkmate fast. If you don’t know this technique you will fiddle around endlessly and your opponent might laugh at your incompetence.

How to give Checkmate with a Rook?

A checkmate looks like this! See first two Images below. 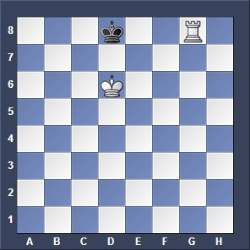 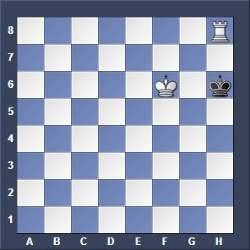 White has given check with his rook but the black king can’t get out of the check. That’s why it is checkmate.

You can give checkmate only at the last rank of the board because the king cannot retreat backwards to escape the check. 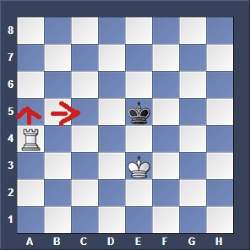 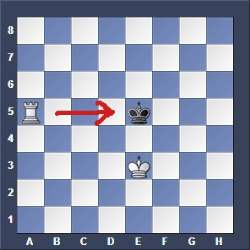 See above. The kings are opposed (they stand opposite of each other) so the white rook gives a check. Now the black king must retreat one row and you chased him closer to the edge of the chess board. 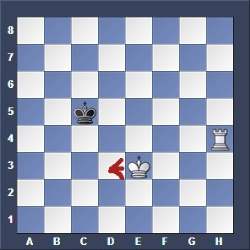 See above: The black king moved to the left. The white king FOLLOWS him going one square to the left also. Don’t give a check with the rook or the black king will break through the line and goes to b4! 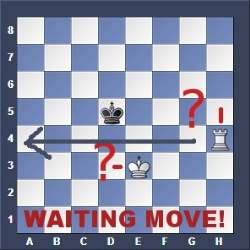 See left position above. Because you are not allowed to move into opposition yourself
AND your are not allowed to give a check with the rook when the kings DO NOT oppose each other (because the black king would not retreat but go forward instead and you lost space), you have a problem here..

This problem is solved with the WAITING MOVE done with the ROOK! See left diagram above: Just move the rook as far as possible away from the black king, stay on right side and
move rook just one square to the left, or move to the other side. (if too close to the black
king it will attack the rook). After you have done the waiting move it is Blacks move and the game continues as before.

There are three possibilities now:

2. The black king goes to the right, then kings are opposing each other and you give a check with your rook.

3. Black king retreats one row, then you cut off king moving your rook one row up. 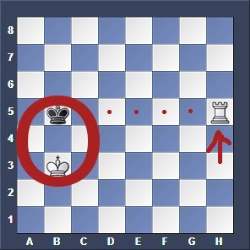 White moves: Kings are OPPOSING so white rook gives check. The black king must retreat now one row and this brings him closer to the last row where he will get checkmated soon. 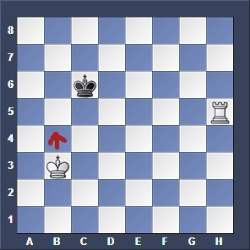 White moves: To give check in these two position is senseless as the white king does not oppose the black king and if given check the king can go therefore forward to c5. This loses time for White as he has to chase the king to the last row. 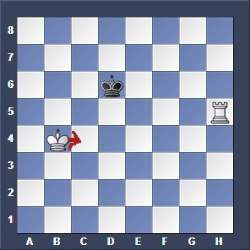 White just follows with his king and waits until the black king bounces back from the edge of the board and must go into opposition, then he will give a check with the rook and the black king must retreat one row which would bring him closer to the last row. 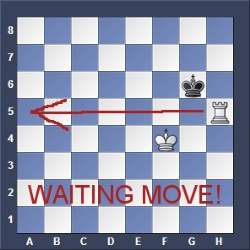 The black king has attacked the rook so the rook must go away as far as possible from the king, best is to the other side. Otherwise the black king will keep chasing the rook. This would lose time.

Now it is your turn! Play this endgame below and checkmate the black king.