If you want to become a good chess player you should follow basic opening principles when making your opening chess moves.

How to start your Game?

1. Get your Kingside pieces out fast to prepare short castling

First push the e- or d-pawn two squares ahead to control center squares AND to get the bishops out, as they cannot jump over pawns. Get the knight and bishop out at the kingside first to be able to CASTLE EARLY.

This brings your king to a safe place. Concentrate on short castling. Long castling is done very rarely and as a beginner you should not be concerned about that.

3. Develop inactive Bishops and Knights BEFORE you develop the Rooks and Queen

When your king is safe you can get the other light pieces out.(bishop and knight) Put them on natural squares where they emanate the most power. Use common sense.

It is stronger to develop a knight or bishop than to push a pawn, simple logic. Of course you have to establish a pawn center first. This is necessary to get the bishops out as they can’t jump over pawns and your e- and d-pawns are stopping the opponent’s pawns from advancing in the center and chasing your knights. But after you have moved your e- and d-pawn (or earlier) get your pieces out fast and castle. 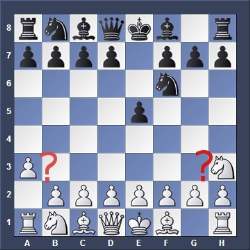 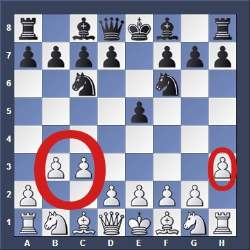 In the diagrams above White is the one who has no idea about how to develop his game logically. He just moves pawns here and there and puts pieces on inferior squares. All this weakens his position and WASTES TIME. The knight does not belong to h3 but should be on its natural square f3 from which it controlls the important center squares e5 and d4.

It should be clear to a logical mind that a knight sitting at the corner of the board on a3 or h3 can never have as much energy than a knight placed on natural starting squares like f3 and c3 for White or f6 and c6 for Black when you start your game. If you want to argue against that then chess is most likely not the right game for you.

There are rare exceptions when in some positions a knight is moved to a3 or h3 but we talk about the general procedure here. Many people just don’t understand that pieces have to be placed fast on strong squares and that the whole army has to be developed BEFORE and attack can be fruitful. I don’t know why. 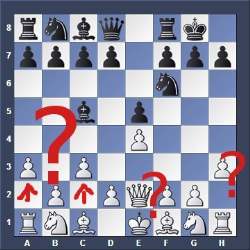 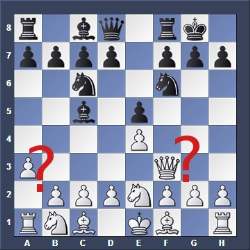 The queen should not be developed at this early stage. In the left position the queen blocks the bishop f1. This means it will take a lot of time to get ready for castling as the kingside bishop and knight must get out first. The queen move makes no sense. White has put a pawn on c3, this means the queenside knight can not go to its natural square at c3 from which it controls the important center squares d5 and e4.

In the right position the queen sits on f3 which is the natural square for the knight. Now the knight has to be placed on the inferior square e2 and blockes the bishop f1. Where should the bishop go now?

Always Keep an eye on weak center squares which you can occupy in the future.

Occupy squares with the knight to create an outpost in the opponents camp. Occupy open files with the rooks. Control open diagonals with bishops. 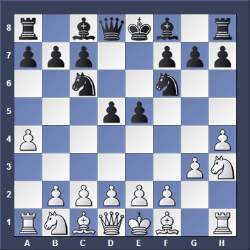 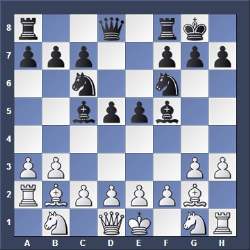 White has placed his pieces not in a purposeful and logical way. He has pushed pawns near the kingside which WASTES TIME and WEAKENS THE KINGSIDE. This might prove disastrous later on in the game.

In the left diagram White has pushed the a-pawn to a4. Why? Ineffective pawn moves like this are wasting DEVELOPMENT TIME and weaken squares or the pawns might become weak themselves and get lost later on. He should have developed knights and bishops instead to natural strong squares like Black has done it.

In the right diagram White has played the rook to a2, which is complete nonsense.
First it is not the right time to develop rooks, secondly this move makes no sense as rook stays inactive. Thirdly he should prepare castling and develop kingside knight and bishop to be able to castle early.

Look at Blacks position! He has played perfectly. All his pieces are placed on strong squares and he has castled already.